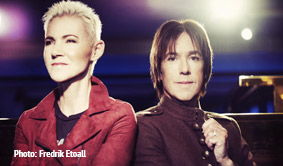 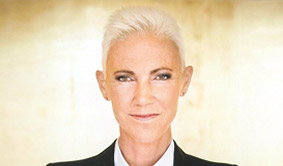 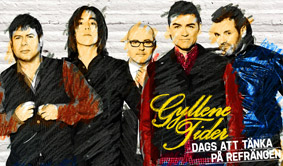 Gun-Marie Fredriksson, better known as Marie Fredriksson, born 30 May 1958, is a Swedish pop singer-songwriter and pianist, best known for forming one half of the pop rock duo Roxette, which she created together with Per Gessle in 1986. She and Per Gessle achieved international success from the late 1980s to the early 1990s with a total of six top 10 US hit songs such as “It Must Have Been Love”, “Listen to Your Heart”, “The Look”, “Joyride” and “Dangerous”.

Marie Fredriksson, who was born in Össjö, was the youngest of five children. The family later moved to the small Swedish town of Östra Ljungby. Being poor, both parents were forced to work, often leaving the children on their own. Together with her siblings or neighborhood children, Fredriksson began to play music and sing. She was often asked by her mother to perform in front of friends who were impressed by her Olivia Newton-John-like singing voice.

Her interest grew stronger in her teens as she discovered artists such as Joni Mitchell, The Beatles and Deep Purple. At 17, Fredriksson enrolled in a music college and performed in local theatre. However, she found it incredibly boring, instead longing for the thrill of an audience. As she put it – “I wanted to perform. I’m a performer.” She became involved in theatre, and after moving to the town of Halmstad, she found herself involved in the local music scene. Joining her boyfriend Stefan’s band Strul, they played local gigs and even recorded a single. After that group split, Marie and a new boyfriend, Martin Sternhufvud, performed as MaMas Barn. They recorded one album together. Per Gessle, lead singer of the famous Swedish group Gyllene Tider, shared a rehearsal studio with Marie, and they became friends. Per believed Fredriksson was far too talented to be hiding behind keyboards in local pub bands and got her an audition with his producer, Lasse Lindbom, who was extremely well known in Sweden. Lasse was suitably impressed with her voice and offered her a contract.

Lasse Lindbom asked Fredriksson to record a duet with him, “Så nära nu”, which lead to her joining his group “Lasse Lindbom Band.” Per Gessle started to encourage her to start a solo career, but she was too nervous and lacked confidence. Fredriksson finally accepted, and she recorded her first solo album, Het vind, produced by Lindbom. “Ännu doftar kärlek” was the first single.

Lindbom, Fredriksson, Per Gessle and Mats “MP” Persson started a new band called “Spännande Ostar” (“Exciting Cheeses”). That same year, Fredriksson and Lindbom went to the Canary Islands to write songs for Marie’s second solo album. They returned to Sweden for the recording. The album was released in 1986, under the name Den sjunde vågen. “Den bästa dagen” and “Silver i din hand” were released as singles, and she toured as a solo artist.

In 1992, Fredriksson returned to her solo career, recording the soul searching Den ständiga resan (The Eternal Journey). The album was her musical self-portrait and was written like a diary, containing very personal songs about her life, feelings and relationships. “It mirrors a four to five-year period of my life,” said Marie about the album. “It was a crisis, with hellish side effects. But I’m glad I went through it.”

While touring in Australia in 1992 to promote Joyride, Fredriksson met Mikael Bolyos, a Swedish singer-songwriter, pianist and guitarist. They became engaged; Fredriksson gave birth to a daughter Inez Josefin on 29 April 1993, and married Bolyos in May 1994. In 1996, she recorded a ballad album in Spanish with Roxette and a new solo album I en tid som vår (In a Time Like Ours). Her second child Oscar Mikael, was born on 26 November 1996.

In 1998 and 1999, Fredriksson worked with Gessle on the new Roxette album Have A Nice Day. In 2000 Fredriksson released a greatest hits album under the title Äntligen – Marie Fredrikssons bästa 1984–2000, followed by a summer tour, later released as a live CD/DVD package called Äntligen – Sommarturné, which has sold more than 350,000 albums; two more singles were released from the album, “Äntligen” and “Det som var nu”. She released all her albums in a box set, Kärlekens Guld (Love’s Gold), which featured previously unreleased songs as well as new packaging.

On 11 September 2002, Fredriksson fainted in her bathroom, hitting her head and receiving a concussion. Scans indicated that Fredriksson had a brain tumor in the back of her head.

The diagnosis led to the cancellation of Roxette’s planned performance at the 2002 Night of the Proms concert series. After waiting several weeks for the concussion to subside, she underwent successful surgery to remove the tumor. It was malignant and she endured months of chemotherapy and radiation treatments. She had difficulties reading, writing and counting for a period of time, and is now nearly blind in her right eye.

In January 2003, Roxette were awarded the ‘Royal Medal with Blue Ribbon’ by King of Sweden Carl Gustaf XVI. The ceremony was the first event at which Fredriksson appeared after her operation. This was one of very few public appearances she made during her illness. She withdrew from the public eye for almost two years. On 21 October 2005, Fredriksson stated, “It’s been three very difficult years”, but in an interview with Jens Peterson published in Aftonbladet, Fredriksson says she has won her fight against cancer. “I’m healthy”, she says. “I’m not receiving treatment any more.

On 23 October 2009, Fredriksson performed with Gessle as Roxette at the Night of the Proms. This was only the second Roxette performance since the cancer treatment. The first one took place on 7 May 2009 in the Melkweg in Amsterdam. In 2010 Roxette’s returned with a mini euro tour. After the successful concerts, the band announced the first full Roxette World tour in 15 years which began in March 2011. A new Roxette single “She’s Got Nothing On (But The Radio)” was released in January 2011, and the new Roxette album Charm School was released on 11 February 2011. Because of the worldwide success (excluding North America) of Charm School, Roxette continued their World Tour throughout the end of 2012. In March 2012, Roxette’s new album ‘Travelling’ was released coinciding with the new music video and single, “It’s Possible”.

Until 2016, Marie was busy with the new Roxette tour which has ended. Her latest solo tour was in 2013.

Working for EMI Music, I was very fortunate to have been Roxette’s US video executive from the beginning of their discovery in the states through their ascent to international superstars. Like so many who loved and admired Marie, I was left stunned and brokenhearted in the wake of her passing. During the hours, days and weeks that followed, I have tried to process her loss with pictures, memories and thoughts of the very real and talented person that was Marie Fredriksson.

LOS ANGELES – One of the most emotional segments of the 62nd annual Grammy Awards broadcast live from Staples Center Sunday night was the “In Memoriam” reel honoring those in the music industry we lost this past year.

GOTHENBURG – Around 200 specially invited guests and a few paying ones saw the recording of the tribute “En kväll för Marie Fredriksson” at Stora Teatern in Gothenburg last night. How on earth do you pay tribute to someone who narrated the soundtrack of your life?

“Our dead are never dead to us, until we have forgotten them.” (George Eliot)

Staffan Karlsson is deeply involved in everything musical in Halmstad, Marie, The Husbands, Gyllene, Roxette, Per, MP or even Harpo, Niclas Wahlgren and Arch Enemy. Here’s his goodbye to Marie on Halmstadmusik.

Marie Fredriksson of Roxette has died

It is with great sadness we have to announce that Marie Fredriksson of Roxette has passed away in the morning of December 9, following a 17-year long battle with cancer.

Today is the day – as we conclude the countdown of the TDR 60 for 60 Project, the journey of this unique celebration brings upon us the final destination, the pinnacle point of this entire experience – Marie’s 60th Birthday.

It’s Marie’s 60th birthday soon so we came up with a most splendid idea. You’ll love this.

Another new release from Marie Fredriksson – OUT NOW!

Marie surprises us with another new song – but what is it like?

Marie returns to the very beginning for her new single – read the official press release (translated into English) here!

From all the staff and all the fans.

Marie Fredriksson, who turns 59 today, has had a long and successful career in Sweden. She started with her own bands Strul and MaMas Barn and moved on as a background singer on EMI.

Per speaks to German media

Per Gessle is on a short media tour in Germany to promote the new album.

Love for Life – a review

I cried reading this book. I cried a lot. Not for the obvious reasons though. I mean, the cancer is terrible and the radiation injuries maybe even worse, but that’s not what made me cry. What then?

Marie: “I have lost many years”

In an article published by Expressen today details of Marie Fredriksson’s new autobiography “Kärleken till livet” – Love for Life are released and we get to learn a little bit more about what we can expect. In the book, Marie talks about the support from her husband Micke and children, but also about the difficulties to walk and why Per was not invited to her wedding. Once upon a time, there was a little girl…

Kärleken till livet – Marie’s bio out in October

Kärleken till livet – The Love for Life – about Marie Fredriksson, written by Helena Von Zweigbergk, will be released October 14 as a physical hardcover book, audio book and ebook.

Marie’s life turns into a book

The Internet was awash on Wednesday with well-wishes, positive comments and such a huge outpouring of love for Marie Fredriksson, following the unfortunate incident on stage during Roxette’s Kaunas gig the day before. Fans were, quite rightly, deeply concerned about Marie’s fall onstage and offered suggestions that could possibly help Marie on stage, to make touring as easy and as comfortable as possible.

With Love to Marie

We all know that Marie doesn’t use the Internet, so fingers crossed this message somehow gets back to our beloved Marie.

The Finnish newspaper Iltalehti recently had an interview with Per Gessle. The insightful piece is written by a long-time Roxette fan Mari Pudas. In the interview, Per reveals that a new Roxette album will be released “after summer.” A single will be released in early 2015. Per also tells that since summer 2013 he’s been […]

GÄVLE – Going into the final, northern, part of the tour Marie visited Gävle in the middle of Sweden tonight. Gävle Concert Hall wasn’t sold out, but close to it. There were roughly 35 international fans there, and from what I saw there was even a meet & greet for some of them. Talking to […]

Marie talks about the tour

When Marie Fredriksson announced the release of Nu! many fans hoped and dreamed for a solo Marie tour.  Their prayers were answered and Marie is currently in the middle of her first solo tour in 14 years, singing songs covering her entire solo career from 1984’s “Ännu doftar kärlek” right up to “Sista sommarens val” […]