The Roxette Diaries: A Review


As the Jonas Åkerlund film has its World Premiere at the Way Out Festival in Sweden, TDR reviews this Roxette feast!

Ever wanted to see bits of “Sleeping Single” recorded during the Look Sharp! sessions? Or how about “Don’t Believe in Accidents?”

Ever wanted to see Marie and Per prepare for a shoot in front of a famous silver bus in the Californian Mojave Desert?

Or perhaps you’ve always wanted your mind blown as you see rare footage of Marie singing “It Must Have Been Love” A Capella during the hard-to-find “Summer Joyride 1992 Tour”?

Then Roxers – this is THE movie for you!

Stevo and Paul have a (virtual) chat about the movie.

Stevo: Firstly, let’s begin with what this movie is not. It is not a documentary in the “traditional” sense. There is no voice over driving the narrative. There are no specifically recorded interviews with Marie or Per recounting their experiences. There are no reconstructions or newly produced sequences. No, folks. This is Roxette in the raw! This is Roxette; no holds barred. This is as intimate as a fan can get. This is a 90-minute Roxette feast that takes us backstage and on the road and in the studio with the band like never before.

Paul:  And that is what makes this so different.  I’ve seen a few band documentaries and any retrospective release always features newly recorded interviews/comments with band members remembering.  Like Stevo has said, this doesn’t have that.  Fans know Per/Marie, band members and management so well that this is like watching an old family home video that’s been recently discovered in the attic!

Stevo:  The format of the film is a collection of home video footage all cut together in a linear fashion based on the date they were recorded. It’s a walk through time starting in 1986. We start off in the studio with the old gang recording the Pearls of Passion album and the film ends in May 1995 as the band takes to the stage in one of their final shows from the “Crash! Boom! Live! World Tour”.

Stevo: There is absolutely no stone left unturned in this die-hard’s paradise. The project is billed as a “Jonas Åkerlund Film” but really, without Åsa and Per being proactive enough to record, what feels like, every minute of the most important moments of Roxette’s life, this film would not exist. You know you’ve seen amazing intimate moments when you’re riding in the back seat of a car with Marie and Per in America and “Listen to Your Heart” comes on the radio and they turn up the volume as they celebrate their U.S. success – it’s guarded and utterly personal moments such as these that really makes you appreciate what a privilege it is be allowed to witness such incredible moments. And that’s precisely what this movie is – a collection of incredible moments. 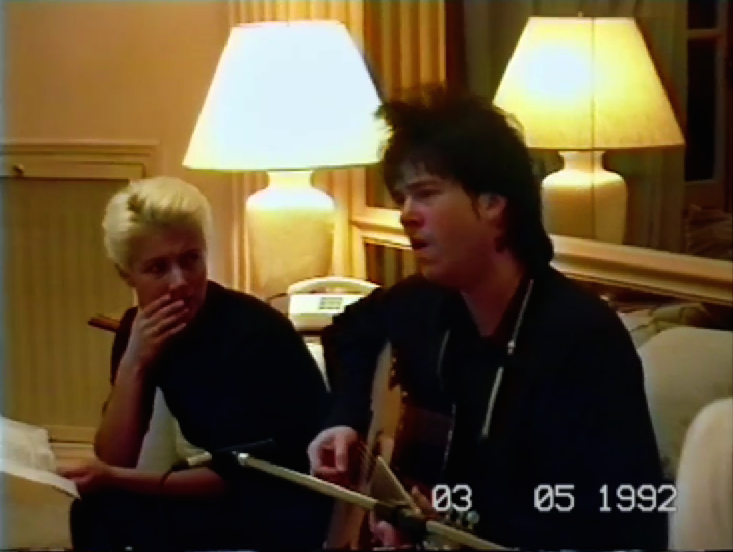 Stevo:  And that’s the beauty of the film – there are so many moments where you’re left pointing at the screen saying “oh my God” that’s from the Joyride video” or “that’s how they did the voice box vocals in Dangerous”. Then there’s the stuff you’ve never seen before like “oh my God, there’s Marie rehearsing Half a Woman, Half a Shadow for the 88 Tour”.

Paul:  Spot on! You’re so right – I found myself saying that so many times at so many different parts of the movie.  I’m sure even spotted some behind the scenes photo shoot preparation from the Official 1995 Roxette calendar…

Stevo:  In fact, there are so many “oh my God” moments that I truly don’t know where to begin… but also, I’m conscious of spoiling it – so this review is more about whetting your appetite and getting you excited about what’s to come… because believe me, there’s plenty to get excited about with this film!

Stevo: Remember the much loved 1991 “Making of Joyride” documentary? You’ve probably worn out the VHS tape (Paul:  Don’t forget – it’s also been on the Rox DVD’s as well!) by now from re-watching it a million times like I did. Now, fast forward over 20 years to that moment when you bought The Per Gessle Archives and heard the full version of “The Big L” demo that gets played in the “Making of Joyride” – it’s like all your Roxette nerd dreams and fantasies have come full circle. All of a sudden, “…you take a walk it’s such a beautiful day, the sun is up, you know it’s going your way – hey hey…” makes total sense. It’s almost like hearing that full demo resulted in the final pieces of the Roxette puzzle being solved.

Paul:  I actually remember where I was when I first heard the full “The Big L” demo.  Which is still amazing, by the way!

Stevo:  You’re right! Well consider this film the final pieces of your Roxette puzzle. This movie brings you full circle – and you know that you have reached full circle when you finally see Pelle hit those suitcases instead of drums in a hotel room recording session of “Here Comes the Weekend”.

Paul:  Stevo, you certainly do have a way with words.  Couldn’t have described this better.  25 years a fan and it’s always exciting to see ANYTHING new, let alone 90 mins of footage like this.  We’ve been so lucky over the last few years with all the tours and new music and this movie certainly does seem to come full circle.  Are Roxette ready to close a chapter on their past and look towards the new future?  Who knows.

Stevo: The inner sleeve of 1992’s Tourism describes the intention of the project as “capturing the energy of the band” – and this film captures that very energy over an intense period for Roxette and it is truly a privilege to be a part of it.

Stevo: If you’re a Roxette fan and you’re not satisfied with this all access, backstage pass to the most important years of the band’s life – then you’ll never, ever be satisfied. But of course, in typical Roxette fan fashion, having said all that – surely Per knows what will be demanding next… a sequel of course; 1999 onwards!

Paul: Are the fans ever really truly happy though?

Stevo: But seriously, Roxette Diaries is a triumph as we delve into the most treasured and never before seen slices of Roxette life – do not miss it!

Paul:  I agree – everyone should check this out.  Even non-Rox fans should watch – an insight to any band at the height of their commercial peak should not be missed.  As for Rox-Fans – you’re gonna love it!