﻿
There are now 24960 entries in ★ THE DAILY ROXETTE ARCHIVES! Check them out!
www.dailyroxette.com/archives
★ TDR Archive for July 17th, 2015
﻿
facebook.com/RealRoxette

I have been waiting to see Roxette live for more then 15 years, and last night I have finally lived my dream. And boy what a night it was. I got my tickets bought

If you are into the fab Venetian Blinds #Roxette is using on tour as a backdrop, you might be interested in a short video of testing them and some info about them. An article was shared by the maker, Perry Scenic Creative on 22nd May saying the set was back to them for a quick service. This means they had to test the blinds after the Bucharest storm to be able to use them without any issues at further concerts. /PP

#Roxette – While can’t stop listening to the remake or watching the making of video, don’t miss out on the KappAhl interview with #PerGessle about the project and more! Check it at the link below! /PP

Parts of the interview: 🙂

What is the The Look about/what does it stand for?
PG: ”What is it about? Explaining lyrics doesn’t help. I never do that. It is up to each person to interpret them in their own way. That is how all art becomes personal. It is about you! The most important thing about all expression is to feel, not necessarily understand. For me it means cocky, young, direct power pop that makes me laugh and smile and live.”

What makes a person beautiful?
PG: ”Some people have the good fortune to be born with an attractive appearance. But it isn’t always so straightforward. Beauty is in the eyes and the body language. I think it helps if you are happy in your skin. Then you are automatically beautiful.”

About the fans:
PG: ”Sometimes we have to pinch ourselves to remind us that we would be nothing without our fans and our audience. They are what gives us positive energy and mean that we never get tired.”

Greatest passion outside music?
PG: ”I am interested in my family, modern art, design, photography and Formula 1. In that order. And wine is fun.”

What do you like to do most when are taking a break from music?
PG: ”I never take a break. My wife says I should.”

Listen to The Look 2015 Remake: https://play.spotify.com/album/1KhfyT7XIOMhl2amP6Wdxr
The making of video (stills are from this one): https://www.youtube.com/watch?v=qHcUAXfxedo

THE MAKING OF THE LOOK – In June Roxette got back into X-Level Studios in Stockholm, the same studio where The Look was recorded the first time, back in 1988…

Have you checked out the 2015 version of The Look yet? If not, why not?! Listen here!

With over 75 million records sold over a career spanning almost three decades, there is not that much left for Roxette to prove. Instead they can let creativity and experimentation form their musical narrative. When they were asked if they could provide the music for a major fashion campaign in their native Sweden they felt that collaborating with up-and-coming producer duo Addeboy vs. Cliff could be an interesting approach.

– For this fashion campaign we felt we needed to come up with something really special. Should I write a new song? Was there anything from our earlier records that we could use? To make a brand new version of The Look (which is 27 years old!) felt very tempting, yet I knew it was going to be a pretty big challenge. But The Look is obviously a great title for a fashion campaign! A few months prior we had started to work with the producers Addeboy vs. Cliff and I had a feeling that together with them, we could find a new angle to the track. And as soon as I heard their musical ideas for a remake of The Look, I knew it was going to work, says Per Gessle about recording the new version.

The Look was Roxette’s first Billboard No 1 and the kick-start of an amazing international carreer. The Look (2015 Remake) will be available both digitally and as a physical single. It’s available as of today on all digital platforms. The seven inch vinyl version of it will be released on August 28th and is already now available to pre-order.

Making of the Look: http://bit.ly/1OavyKC

THE MAKING OF THE LOOK – In June Roxette got back into X-Level Studios in Stockholm, the same studio where The Look was recorded the first time, back in 1988… 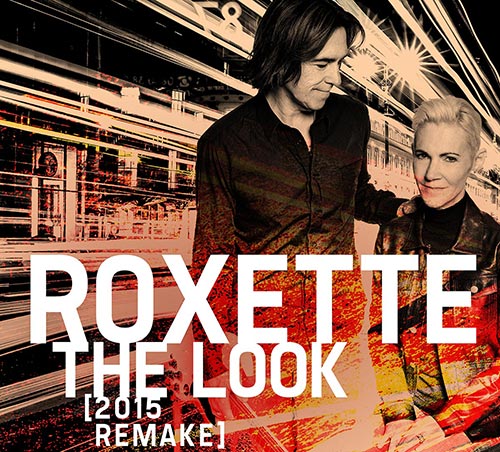 Since the news about the collaboration between Roxette and KappAhl was shared, we’ve been looking forward to the 2015 remake of one of Roxette’s most iconic songs, The Look. Many fans are rather hungry for some new Roxette songs instead of hearing a ”hundredth” version of The Look, but the time will come also for […]