Per Gessle, a handy man with a plan 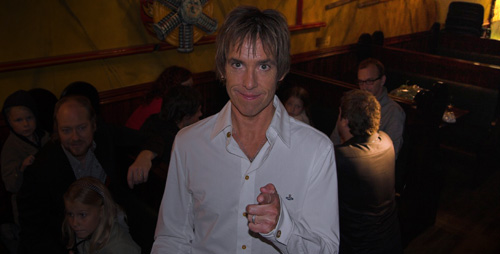 After 20 Swedish towns and 128,800 friends in the audience Per Håkan Gessle has finished his latest tour. The Daily Roxette got a word with him. Per, how do you feel now?
Life's empty, boring and quite sad to tell the truth. It always is when you’ve finished a tour. So the whole band is singing the blues at the moment!!! Everyone wanted to go on for at least another month. This has been the most enjoyable tour I’ve ever done. Maybe it’s the music, maybe it’s just the cycle of life I’m in at the moment, I’ve got so much more confidence in what I do these days. And of course it helps to have all these wonderful people in the band, both on and off stage. The crowds' reception have been tremendous. That helps, of course. And yes, I’ve got some great songs to play. I’m really proud to be able to offer this smorgasbord of music without even a glimpse at the Roxette door. By the way, I have to send some big hugs to all the incredible fans all over the world who came to our shows this summer. You’re so sweet!!! We loved to see y’all in the front row!

Yes, you certainly have a plethora of songs to chose from! Even so the Swedish tabloids have been going on and on about Your Big Flop. What's your comment on that?
Well, the tabloids tend to see everything in black or white. I’m 100% satisfied with this tour and the number of people that came by but apparently the blood seeking journalists' commercial expectations were even higher. And I think that whole discussion is a load a crap. I can’t understand why it’s so important if 6000 or 16000 come to a show. The most important thing must be if the concert’s any good! And I'm convinced that the audience thinks so as well.
The local press, on the other hand, has been very supporting and has given us loads of great press. Yea, the tabloids have really lost it. Check this out: They ran a story in Malmö’s Kvällsposten the other week just before our Malmö gig. The article mentioned that my tour was by far the biggest one in Sweden this year and that our Malmö-gig was the highlight on the season in that particular area. The headline? "The Fiasco continues"…

So typical… So, what's up next, after a weekend off? You mentioned in an evening paper that you have a new "secret project," what can you tell us about that?
Nothing. Sorry.

Short and sweet. Besides that, you have described almost every gig of the tour as the best gig, doesn't that come out as hollow words after a while?
No. The last seven or eight gigs all went up the #1 spot immediately!!!
The last half of the tour was totally mindblowing. At least to me and the band. I'm thrilled that we recorded the Stockholm gig for the DVD. I've seen a rough copy, and it looks and sounds really amazing!!

Lovely! Stockholm was indeed a killer. I saw the opening show in Halmstad, and while it was great, it wasn't even close to the Stockholm concert. It was like seeing two different band almost. How would you explain that, it can't be just that you've gotten better during the month?
Well, I think the difference for the crowd is quite marginal, to tell the truth. Cos this band has got a very high “low level”. We notice ourselves, of course, that we get tighter and better for every show we play. I thought the opening gig was excellent, but sure, compared to the finale in Stockholm, or the burnouts in Örebro or Karlstad, I guess it was slightly weaker.

Like I said, "weak" is such a big word. It's like you say, a very high lowest level, so the gig was definitely not bad…
Anyway, back to the tabloids. They also claim there's a schism between you and the other guys in Gyllene Tider, is that a fact, or is it just more of their fiction? Also, what are the plans for Gyllene Tider?
No, there’s nothing there. There’s no fighting at all between us, it’s all in the tabloids wet dreams. And there are no plans either. I'm sure Gyllene Tider will be back sometime in the future, but not for a while. I'm busy doing other things. However, it was a treat working with M.P. on stage again.

Right, your new project… Speaking of projects, your other project – Roxette, will it get off the back burner anytime soon? They say Marie was at your Stockholm gig, did you get to discuss anything?
Sorry no, no plans there either.

When we met at the opening gig you mentioned a possible "world club tour," is that still in the cards? I mean, the band is still hungry…
Well, since we love to play together we have discussed possible options for doing some more. And yes, a club tour has been discussed. Sounds like fun but I really can’t see it happen until late 2008 at the earliest. Unless, we’ll do a couple of shows in Finland/Norway later this year. At the moment, I don’t know.