STOCKHOLM/BILBAO – Marie Fredriksson is currently touring with the show "Stjärnklart". Fans coming from Spain, Germany, Romania and Russia attended the show on Saturday, November 29 in Stockholm and this is their story about the show.

The night started with a meet & greet. Meeting point was the ticket office, a sign requested fans from the above mentioned countries to follow "this way," they were welcomed by the show organizers in a big room, where they waited for Marie while standing around some tables. Marie and Mikael Bolyos appeared a couple of minutes later, and spent a great amount of time talking with the more than the 30 fans present. "Marie was smiling all the time, she took her time to speak to everybody, one could see she was very glad to meet her fans again," says one of the fans. Photos were taken, albums were signed, until it was time for Marie to go backstage and get ready for the show.

Fans then headed to the concert hall, and got seated. The show was about to start.

After some performances by the other acts participating in "Stjärnklart", somebody brought a stool to the middle of the stage; it was Marie's turn. Marie walked to the stool, got some help to sit on it, and performed her first song, "Ännu doftar kärlek." Marie sung a very strong and warm version of this song from her first album "Het vind" and received loud ovations. After singing the song she made a victory gesture with her fist and thanked her fans with a big smile, "I thank all my fans who are here tonight."

More acts followed, and then it was Marie's turn again, with a surprise performance of Aretha Franklin's "I Never Loved a Man (The Way I Loved You)." "The unplugged version is nothing compared to what she sang on Saturday," says one Spanish fan.

After the break Marie opened up the second act with Evert Taube's "Så skimrande var aldrig havet". Just like on the 2000 "Äntligen" tour, she sang the first part a-capella and after the bridge the whole band joined to sing the second part. Everybody was in silence, enjoying the voice, the feeling, Marie. Some people couldn't help crying.

The show went on with a magician and other artists such as Lisa Nilsson and Måns Zelmerlöw. Towards the end everybody except Marie sung Christmas songs, and then they were joined by Marie to sing the last song of the show; "Tro". Marie was wearing white this time, and was again sitting in the middle of the stage, with all the artists, who sung backing vocals, sitting on the stairs in the background. When the song was getting close to an end, all artists joined Marie at the front, and she stood up to sing the last notes of the song.

The applause was immense, everybody was standing for Marie, who returned to the stage twice to the ovations.

Thanks  to Txiqui and all fans who shared their stories. 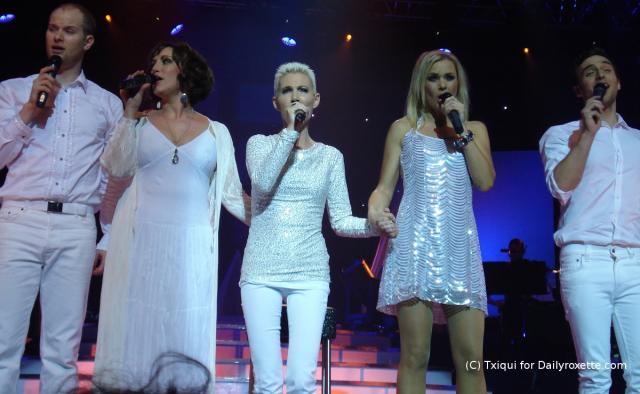