Year in review 2007: Gessle on tour, Marie and husband in studio – but where was Roxette?


12 months have gone by in a flash and it's again the time for The Daily Roxette's annual "Year in review" article.

2007 was something you can call a slow news year - Roxette wise. Per released a Swedish solo album, "En händig man," and did a summer tour, but there was not a single Roxette news article after March 2007.

Late December 2006 and a couple of days later in January 2007, Radio Halland aired an interesting two-part interview with Per Gessle. In the interview Per revealed for the first time that he's working on a new solo album. The reporter had also heard rumors of a summer tour and asked Per about it. According to Per, nothing had been decided at that point and that the "Mazarin" tour had been put together only two months before the premier night. In March the tour looked more likely when Expressen published a story about Per releasing an album soon with a tour following it.

Per also claimed he's working on a follow-up to Son of a Plumber album, but later Per admitted that he was only trying to fool people with it. Although, later in the year, Son of a Plumber did make a surprise comeback…

Album and tour finally public after months of rumors

In February, the last Roxette single, so far, was released. "Reveal" included two new remixes of the song and a slightly modified single edit. The same month, Roxette's "Hits!" reached gold album status in Sweden and got a raving review in a US magazine Blender.

Only a week after Expressen's article, Per published a press release about a new solo album, "En händig man," to be released in June and a tour, starting in July in his hometown Halmstad. Per also did something not many artists can: the concert tickets were available immediately, three months before the album. Good or bad? Who knows…

In March, we also had a great exclusive interview with the Man himself. Per told us about the recording sessions of "En händig man." 21 songs were recorded, some live in studio. Originally, Mats "MP" Persson was playing in the band, but his parts got removed in the mixing process. Per also told that EMI Blue Note was going to release the Son of a Plumber album in the US, but because of EMI downsizing, the plan was cancelled. "Too bad, as my contact at Blue Note just loved the album. I'm still shopping around though, as the album is quite timeless it doesn't matter if it's not released in 2007," Per said to The Daily Roxette.

In the interview, Per also predicted that the Swedish press will call the tour a flop because he will never reach the numbers Gyllene Tider did in 2004. Per predicted well, since in June the Swedish tabloids wrote about bad ticket sales: none of the concerts were sold out. EMA Telstar's CEO Thomas Johansson tried to put them back on track: "En händig man" tour was at that time the best-selling tour in Sweden and in any case, usually only 50 % of the tickets get sold beforehand. Out of the 140,000 tickets, 80,000 had already been sold. This didn't help and tabloids continued to compare the figures to the record-breaking Gyllene Tider tour.

Micke and Marie - husband and wife - in "A Family Affair"

At the end of March news broke on the first solo album of Marie's husband Mikael Bolyos, "A Family Affair." We also got the chance to publish a snippet of the lead single, "When The Lord Is About To Come." Later, when we published the track listing, we also published a snippet of another song from the album, "Me & My Guitar."

"A Family Affair" album was interesting to the fans of Marie, since she was contributing to many of the songs. The last song, "Hometown," is extra interesting since it was featured in the Colin Nutley movie "Sånt är livet" which contained many of Marie's songs, one of them being "Tro," but was never released before this.

There were a couple of more new Marie releases later in the year. Aimed to the Christmas shoppers, Marie released a ballad hits album "Tid för tystnad." It contained a fully new song "Ordet är farväl," written by Py Bäckman and Micke Bolyos, which was also released as a single, and a Swedish version of "A Table In The Sun," "Ett bord i solen."

The summer of the handy man

The lead single of "En händig man," a song with the same title, was published in May and the complete track listing of the album a few days later. The Daily Roxette proudly presented the world premiere of the song.

We had a nice chat with Per and heard his feelings when the album was finally ready. In the interview, we hear some nice tidbits about the songs on "En händig man." For example, "Om jag vetat då (vad jag vet nu)" was originally intended for Roxette and had the English title "If I'd Known Then (What I Know Now)." It never got recorded, because Marie was ill at the time and they decided to concentrate on "Opportunity Nox" instead. The closing track "Min hälsning" (my personal favorite! -Editor's note), was originally recorded as long as 29 years earlier in 1978. Per had totally forgotten this song he found on an old cassette while looking for cassettes to be photographed for the book! More details on the songs we got in June, when Per told details of each song, exclusively for The Daily Roxette.

Like so many times before, right before the tour Per and the band had a "secret" concert in Per's hotel in Halmstad. Two days later, they climbed the big stage at Örjans vall. 17,800 people witnessed them perform 23 songs live. "The concert itself was very Gyllene Tider oriented, with 10 out of 23 songs. The rest consisted of seven 'En händig man' songs and six from 'Mazarin'," wrote Thomas Evensson in his article for The Daily Roxette. He wasn't the only who noticed the large number of GT songs: the Swedish newspapers wrote about it over and over again during the summer.

One month and 20 cities later, "En händig man" tour was over. The Daily Roxette had a chance to meet him. "Life's empty, boring and quite sad to tell the truth. It always is when you've finished a tour. So the whole band is singing the blues at the moment!!! Everyone wanted to go on for at least another month. This has been the most enjoyable tour I’ve ever done," Per told our reporter.

The final concert in Stockholm was filmed, broadcast on TV and later released as a DVD in December. A notable thing in the release was that the cover picture was taken by our very own Thomas Evensson.

In October, Per's biography "Att vara Per Gessle," got published. The book is written by Swedish journalist Sven Lindström. The book itself is huge: it's roughly the size of an LP, has 280 pages and weighs more than 2.2 kilos. A bonus CD is included, containing previously unreleased tracks, such as the demo of "The Look" with Per singing and a demo of "Joyrider" which, of course, was made later famous with the name "Joyride." There was also a special edition of the CD, available only through AdLibris. That CD contained two more tracks, including an earlier demo of "Joyrider," showing nicely the progress made when a song turns into releasable shape.

Per and Sven Lindström had a few signing sessions around Sweden. Here are a couple of previously unpublished photos from the Malmö session by Ulf Stjernbo: 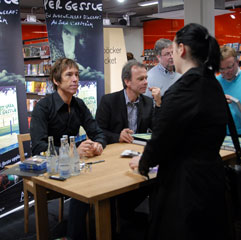 Oh, and that surprise comeback of Son of a Plumber? SOAP and Per released a double A-sided single with "Pratar med min müsli" from the "En händig man" album and a completely new instrumental track "Shopping With Mother," (supposedly written for the Swedish TV-show "Boston Tea Party") which really sticks to your ear!

A more or less complete list of releases in 2007