Roxette in Dresden, certainly a night to remember


DRESDEN – Just 24 hours after an explosive show in Berlin Roxette has finally found its way to Dresden, Germany. It was the first time they played this town. They did this pretty well, as you can read here. Yet there are some points worth being mentioned.


It’s a Sunday afternoon, it’s warm, the sun shines, people are happy. There is this huge stage by the river Elbe, when you turn your head you see the majestic silhouette of Dresden, the place the Saxon kings have resided for centuries and which got bombed down shortly before the end of World War II. Now Dresden shines again, it is a place for tourists from all over the world.

The stage in Dresden a couple of hours before the concert

The venue looks quite small, there is just a small standing area directly in front of the stage, a little further away there are stairs like in an amphitheater people will sit on later. After the show Per will speak of 8.500 people in the audience but that’s not the whole truth. Because a few thousand more Dresdeners are sitting on the meadows surrounding the stage, outside the fences, and listen to the sound coming from the stage. Also, just 200 m away a huge concrete bridge leads over the Elbe and hundreds of spectators gather there to watch the band play. It’s not that the band could have sold more tickets, no, the venue looked pretty full already, it just shows how much interest there is in Roxette’s music among the inhabitants. I saw some of them asking the girl in the box office how much the tickets were. After having learned that the entrance would cost them 71 Euro, they just nodded their heads and walked away again.

Dresdeners outside the venue listening to the concert

A little after nine, Roxette came on stage and started the show. First things first, the performance was solid. It took a few songs though to catch the hearts of the audience but with “How Do You Do!” the ice finally broke. From then on it was fun to watch both the band and the audience celebrating a loud party while the sun was slowly setting and the moon rose behind the clouds. The Dresden skyline turned into yellow although I really doubt anyone noticed this before the concert ended, because what happened on stage took all the attention of the spectators.

To answer the most urgent question: Yes, compared to the Berlin show the day before it was a little less energetic, you could feel that another day of rest could have done the band good. Especially Marie seemed to be a little frail, there were problems with lyrics again. And here is the thing I really would like to talk about because the show’s audience not only consists of fellow Roxers but mostly of just very normal people who happen to like Roxette’s music and want to see them live, people who next month would go and see another ’90s band. Maybe they have followed the Roxette story through TV and newspapers, maybe they haven’t.

When you watch the people in the audience, and I’m not speaking of the front rows mostly consisting of the same group of fans, they seem to be a little astonished when they see the band, and especially Marie coming in. Yes, the artists’ looks have changed since the 1990s but you would recognize them still. What I mean is the secretive way Marie is lead onto the stage. Yes, Per has mentioned in uncounted interviews that Marie’s health is affected but here’s the thing: Not everyone has read the interviews. So people are wondering if Marie maybe broke her leg or what else might be the problem. I understand that having the stage darkened while tour manager Bosse Johansson leads Marie to her seat is meant to provide dignity. On the other hand, Marie walking out arm in arm with Per gets celebrated at the end of the show. Why not do the same when she enters the stage? Put the spotlights on her, have the band applauding her when she comes in, give Bosse proper stage clothes and let the intro track play longer until she sits. This is what I would call a celebration of the fact that Marie, in spite of what she has gone through, is there this very night singing for the thousands of people. If this part of the show looked more professionally themed the audience would grasp in a second that there walks a lady. They would then not wonder that she sits on this chair during the whole show. You would not have to darken the stage again when she walks in and out before the extra songs. The fact that Marie cannot dance, jump or even walk properly is nothing to be ashamed of, instead be proud that she is doing shows every other night and let the audience cheer at her. Put on the lights, and you will see the audience showing their warm support.

Another thing is, Marie obviously caught a cold the recent days. Amazingly enough she is still doing concerts. But does the audience get told? Nope. Instead, another secretive procedure is executed when Bosse comes in between two songs, blocking the view on Marie with this body while handing her a tissue and a probably warm beverage. Maybe you cannot see this from the center of the audience but it’s visible from the sides so it’s rather useless. Those who see it, understand. Those who don’t don’t. They are now wondering why Marie’s voice is not as good as in the olden days anymore. Should they understand that the reason is a simple cold, the critics would be much more friendly, I’m sure. When other artists have temporary health problems, once they apologize on stage, the audience will understand and even bless them, being happy that this musician is doing this show for them instead of having the concert canceled.

Now when the technicians think that “maybe Marie’s voice is not so great today” they make a weird decision: They take down the volume of Marie’s microphone – along with Per’s, for some reason. The result is, you feel like you attend a karaoke show. You hear the instruments, you hear Dea (who, and this has not been said often enough, really shines on stage and deserves a lot more attention) but you hardly hear the voices of the main singers?! I mean what is the outro of LTYH like when you see Marie screaming her soul out but you don’t hear it? Honestly, Marie with a cold is still a couple of notches better than most other artists performing live in good health. Maybe she cannot hold a note as long then but she still sings with energy and hits the notes. Also when she happens to miss a word or a line, the audience will notice this even though her microphone is set to nearly mute. Which means it makes no difference at all. You can as well have her sound be audible, at least we can enjoy the 99 % of good times during the concert.

The stage design is by far the best this band has had in years. I must admit I was a little cautious when I saw it in photos first, but live in the hall it is really great. Colors, animations, lights, they all suit the music and the idea that a power pop band is playing here. Except for the fact that it doesn’t work outdoors. As long as the sky is still bright you see a black stage with some window blinds in the background. Here in Dresden another problem was that the actual stage provided was much bigger than what the stage design had been made for. The blinds looked a little lost. Only later when darkness set in, the lights finally created this special colorful atmosphere. Considering that Roxette is going to play a couple of outdoor shows this summer, also in bright Scandinavia, this is a point that needs to be thought over again. 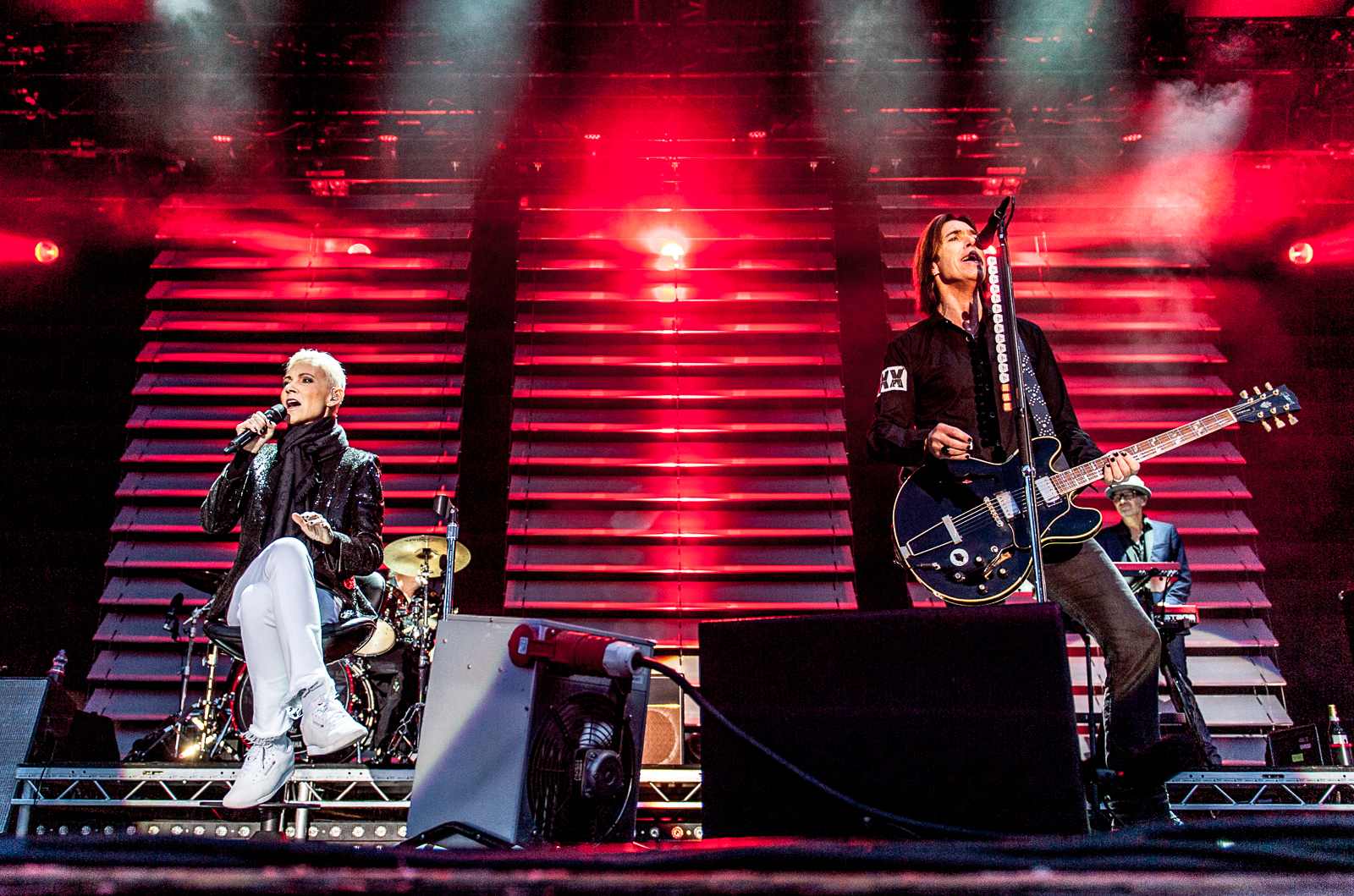 May I utter another idea? There is this short intermezzo with Magnus and Per about Abba, Volvo and Magnus’ favorite album. Silly but funny. Now I really wonder, could this idea not be extended to more band members, thus introducing them step by step? Also I can imagine that involving Marie a little more in the actions between the songs would make her look less alienated on stage. Alienated, you ask? Yes because despite her being in the center of the stage, the action (guitar duels, posing etc.) happens more on the left or right side or even close to Pelle’s drums. Marie for some reason looks like she sits somewhere in the middle of all this turmoil but the only one really building up a personal connection with her on stage is actually Dea during the duets. There’s room for more.

Anyway, who am I to complain? Roxette is a band that again and again knows how to surprise its audience. They play entirely live, a fact that should be stressed more often. They deliver a rock solid performance thanks to their sum of talents. I think their shows have never been as good as now because they are now more personal, more refreshing, less strict and really powerful. With the new stage setup and this spectacular energy I would not even hesitate demanding another live recording to be released.

What do our readers think?