Per and Micke ‘Syd’ in dispute? “No,” says Micke 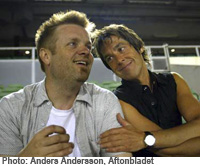 Yesterday both Swedish tabloids Aftonbladet and Expressen had huge articles about Per not attending Micke Syd's wedding. Both papers claimed that Per and Micke are in dispute - or even enemies of a higher level. Why writing such articles about Micke's wedding is beyond The Daily Roxette. The fact that Micke 'Syd' and Helena got married didn't get much attention in the Swedish tabloids.

According to TDR's sources the rumors aren't true. Basically what has happened is that since the only Gyllene Tider member Per invited to his wedding ceremony in 1993 was MP Persson, it was sort of natural that the other members don't invite Per back.

It may be true that Micke and Per aren't the best of friends, but they are not fighting. "We are on good speaking terms, sometimes in life relationships just don't work," says Micke in an interview with Aftonbladet today. Micke also says that Per saying "I wish Micke and what's-her-name-again the best of luck" was a normal Per-comment - a joke.

Micke says to Aftonbladet and Expressen that he doesn't want to contribute to the mudslinging, but it's not about Per's money or fame. At the same time Expressen claims that their article was "spot on" according to Micke.

In the mid-eighties, there actually was controversy between Per and a Gyllene Tider member. Back then, Per and Anders Herrlin fell out of touch due to Anders breaking up Gyllene Tider. That is also a thing of the past.

Update: Per has issued TDR a statement with his views on the incident.