“Listen to Your Heart” 3 x “million-air” 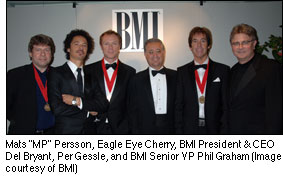 BMI is once again giving awards to Per Gessle and Mats “MP” Persson as their song “Listen to Your Heart” has now reached its 3 millionth broadcast on American radio. It took nine years to reach two million – and eight years more to reach three million (total playing time non-stop: 27 years.) Recently, the pace was increased as D.H.T. released a succesful dance cover of the song. Per Gessle comments to Aftonbladet “This award means a lot to me as it clearly shows what an impact this song has had!”

Per also mentions that the Americans were “duly impressed” by the video as they thought Roxette had built Borgholm’s Castle ruin just for the video.

Update Oct. 6: “Listen to Your Heart,” written by Per Gessle and Mats “MP” Persson, and published by Jimmy Fun Music (all STIM), was named Song of the Year and received one of the organization’s [BMI] highest accolades; the Robert S. Musel Award. “I’ve never heard of this Robert dude. The sculpture was very big and very ugly!” comments Per. He also tells TDR that he thinks this is an amazing award, “…the last and the best of the night!”

Recorded by Belgium-based duo D.H.T., the song was originally a #1 hit for Roxette in 1989 and received the BMI Dance Award at last year’s ceremony.

Dan Kroll contributed to this article.