“It’s amazing that Marie has recovered,” says Per 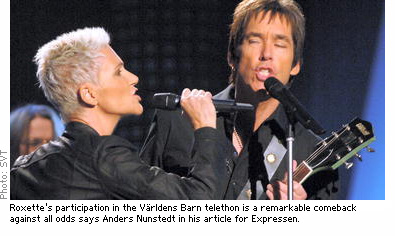 Now Roxette starts over again. With a new style, new songs and a new Marie Fredriksson.

“The lively Marie is gone. Of course she’s a different person today,” Per Gessle says.

It’s 20 years ago this year that Roxette made its single debut in Sweden. The rest is pop history, now with a happy ending.

It could have ended considerably worse. When Marie Fredriksson in the fall of 2002 was struck by a brain tumor, it was a shock not only for the Roxette singer but also for everyone close to her.

“It was scary. There are different grades of cancer and of course one lived in suspense. I don’t even think the chance was 50/50 for her to make it,” Per Gessle says.

“It’s amazing that Marie has recovered. Now Roxette is back, even if on a different premise.

Per Gessle, who has been amazingly productive during the 2000s, explains that the initiative to Roxette’s comeback came from Marie. “When the compilation became viable it was she who suggested that we should record a new song.”

It became more than that. On the “Greatest Hits” record released on Wednesday there is, in addition to the single “One Wish,” the ballad “Reveal.”

“Actually we haven’t discussed if we are going to do something more. I don’t know what I want to do. On the one hand it’s fun, of course, but I have no idea if there’s a point in continuing. It doesn’t feel so tempting to go on promotion trips and sing playback in Vienna, Hamburg and Madrid,” Gessle says.

The question is also if Marie Fredriksson wants to, and can manage, a full commitment to Roxette.

“It’s naturally a different Marie today. When something like this happens one reconsiders everything. It doesn’t help how many gold records you have hanging on the wall when you get ill,” says Gessle.

Per explains that “the singing voice is back at full strength, but there are other circumstances. She has a problem reading fast and trouble remembering things. Everything goes a little slower. Maybe it can be worked on, but it takes time.”

Roxette’s participation in the “Världens barn” (Children of the World) gala tomorrow is a comeback against all odds.

But there’s no doubt they’re back. “One Wish” immediately swooshed up to second place of the Swedish single chart and has also started to climb internationally.

“Who would’ve thought that,” Gessle says with a laugh. “Now we’re actually back, and have really no idea where it’s gonna end.”