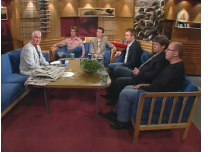 Gyllene Tider will appear this Saturday on a morning television program. Their website has announced that the band's first single will premiere on TV4's program "Nyhetsmorgon" on May 15th.


Update May 15: A "video" was shown, homemade, like the "Mazarin" sessions. The video looks perfectly OK. What was interesting is that a recording schedule in the video listed the illusive Roxette song "Ghost in the House" to be recorded. The Daily Roxette guesses this song has become "Ande i en flaska" in Swedish. Other interesting things on the schedule was for instance "Ingen kan som du", which is on Per Gessle's album "Demos".

Other than that Gyllene Tider feels that it was great to meet again, the songs were recorded very fast, sometimes even "too fast", according to Micke Syd, drummer. The interview was rather vacant as nothing really new came up.