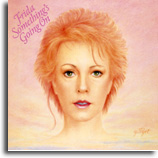 Frida, the brunette of ABBA, will re-release her 1982 album “Something’s Going On” June 20, at least in the UK. The album was originally produced by Phil Collins, who kept Per Gessle’s arrangement of the song “Threnody,” which is featured on the album. It was also the flip side of the lead single off the album.

“Threnody” is a poem by American poet Dorothy Parker (1893-1967) that Per Gessle used as lyrics for music he wrote. The new album release contains two bonus tracks.

Frida has kept quiet the last few years, the last thing heard from her was “Djupa Andetag,” released in 1996, where Marie Fredriksson appeared as a collaborator.

“Threnody” was once written for the mystical group Modern Times (Gyllene Tider’s first name for a hesitant international career), but was sent to Frida instead. Later it was released by Gyllene Tider on an EMI compilation: “Radio Parlophone 2.”