“DJ” promo to be released 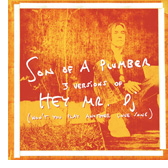 Monday February 13 a promotion single of “Hey Mr DJ” will be released, to radio stations only. It will contain the original version of the song plus two fresh remixes. The first remix is called Love-For-Sale and is made by Clarence, Christoffer and Jimmy Monell (aka Shooting Star), the second is remixed by Jimmy and thusly called Jimmy Monell Treatment. While the first remix is very radio friendly, the second will probably do best on the dance floor.

This single will most probably not be released commercially, however, there is a fair possibility that the remixes will be available as downloads at for instance CDON and iTunes.

In cooperation with Son of a Plumber.com, TDR presents these snippets: