﻿
There are now 24883 entries in ★ THE DAILY ROXETTE ARCHIVES! Check them out!
www.dailyroxette.com/archives
★ TDR Archive for March, 2012
﻿
www.roxetteblog.com
“It’s Possible” video premiered in Germany and Austria as well

Roxette’s video to “It’s Possible” had its premiere this morning on Swedish TV4, even though only a few seconds were shown. German/Austrian portal MyVideo premiered the video some hours later. The video can be watched here (works only from Germany or Austria) Roxette — It's Possible – MyVideo Österreich For those having problems watching it, […]
Mar 31, 2012 •
Details
﻿
www.roxetteblog.com
Interview with Roxette on TV4 is available online

Marie Fredriksson and Per Gessle (=Roxette) were interviewed at Nyhetsmorgon.  The interview is now online. Enjoy! You can find a translation in English on Roxette.ro.
Mar 31, 2012 •
Details
﻿
facebook.com/DailyRoxette

For you who don't know - we have a new album out! Travelling is its name, awesome is its game.

The LP version of “Travelling” comes without any new pictures. Instead the pics are just bigger. The demo of “Me & You & Terry & Julie” is rocky and doesn’t point that the final version would have slow verses and a fast chorus. The demo of “Touched by the hand of God” (called Charm school) […]
Mar 30, 2012 •
Details
﻿
www.roxetteblog.com
Roxette enters Swedish chart at #8

Roxette entered the Swedish album chart at #8 with “Travelling”. As expected, #1 was Madonna with her “MDNA”. This means that Roxette was the second highest entry this week. (One could think it was a bit of a bad timing to release the album the same week as Madonna…, but who cares, we still love […]
Mar 30, 2012 •
Details
﻿
facebook.com/DailyRoxette

CDON has free shipping on Travelling.

Per Gessle announced yesterday on Facebook that the video of “It’s Possible” will be premiered on Saturday March 31 on at Nyhetsmorgon, on the Swedish channel TV4. Per will be in the TV studio for an interview as well. Normally the show is available online some hours after the TV broadcast. Looks like the video […]
Mar 29, 2012 •
Details
﻿
www.roxetteblog.com
Santiago concert TV ad

SYDNEY – More “promotion” continues with one of the largest radio stations in Sydney, MIX 106.5, the same network that sponsored Roxette’s recent Australian tour, featuring the Travelling EPK on the front page of their site promoting the album. Read the full story...
Mar 28, 2012 •
Details
﻿
www.roxetteblog.com
Roxette sells gold in Sweden

One more success for Roxette: the new album “Travelling” has sold gold (20.000 copies) in Sweden already! The album was released on Friday 23rd of March. At what position will the album enter the official Swedish charts? We’ll see on Friday! Source: D&D Management.
Mar 28, 2012 •
Details
﻿
facebook.com/DailyRoxette

[News] “Travelling” down under http://bit.ly/HfPZaz

This the new ad promoting “Travelling” album in Sweden. It includes previously not seen pictures from Asian leg of the tour.
Mar 28, 2012 •
Details
﻿
www.roxetteblog.com
Interview with Per Gessle on Swedish radio P4

Per Gessle was interviewed today in the Swedish Radio P4 show “P4 extra med Lotta Bromé”. In the approximately 20 minute long interview Per explained about live on tour, about him being quite picky about certain things, playing with Barbies, “Travelling” and much more. You can listen to the interview – in Swedish of course […]
Mar 27, 2012 •
Details
﻿
www.roxetteblog.com
Travelling charting

The news seem to have been circulating for a few days now. It is however still not confirmed at this point. We have received some messages from fans indicating that Roxette are to play at Molson Amphitheatre in Toronto on August 30, 2012. But again, as mentioned above, the date is still not confirmed and the information […]
Mar 27, 2012 •
Details
﻿
www.roxetteblog.com
Watch Roxette’s performance at Benissimo

Roxette’s performance at Swiss SF1 show Benissimo can now be found on the Benissimo website (starts at about 2:00:00) or youtube (see below). Roxette performed “It’s Possible” in which seems to be the only TV performance to promote “Travelling”. There was also a short interview on SF1 Glanz & Gloria
Mar 26, 2012 •
Details
﻿
TDR Discography 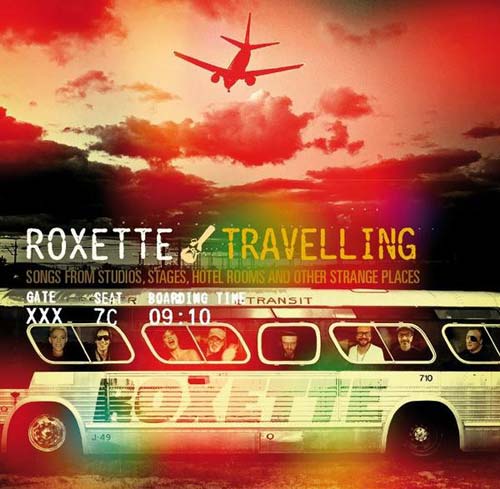 Travelling (CD)
Mar 26, 2012 •
Details
﻿
www.roxetteblog.com
When will “Small Apartments” soundtrack be out?

Jonas Åkerlund’s “Small Apartments” film had its official premiere on the SXWS festival in Texas last week. As for long-awaited soundtracked composed by Per Gessle – there is still not stiff release date. According to Gessle himself: Nobody knows [when it'll be out]. Chris is putting together the last missing bits as I write this. […]
Mar 26, 2012 •
Details
﻿
The Daily Roxette

Son of a Plumber The Movie – Part One….

Here is a collection of some videos we found on YouTube with the new songs from Travelling. The purpose of adding the links here is to spread the word about this brilliant new album, don’t forget to buy a copy on iTunes or Amazon or your store next door! You can also listen to the […]
Mar 23, 2012 •
Details
﻿
www.roxetteblog.com
World Tour 2012: Singapore Audio Bootleg

If you don’t have enough of Roxette 2012 Live experiance, so it’s another chance. It’s the second audio bootleg available this spring (or autumn) – now from Singapore Indoor Stadium and recorded on March 6. The whole recording is available for both listen on YouTube and downloading (here or here)
Mar 23, 2012 •
Details
﻿
facebook.com/DailyRoxette

Some days before the release of Travelling, the The Daily Roxette team “got together” again to do another (hopefully) classic review of Roxette’s new and highly anticipated album. Travelling is a follow-up to the 1992 album Tourism.

Some days before the release of Travelling, the The Daily Roxette team “got together” again to do another (hopefully) classic review of Roxette’s new and highly anticipated album. Read the full story...
Mar 22, 2012 •
Details
﻿
www.roxetteblog.com
SPOILER: Very first look at Roxette’s TRAVELLING album!

Here are the very first look at Roxette’s TRAVELLING album. Have you purchased/ordered your copy yet? Thanks to Jessica who sent us those pictures!
Mar 22, 2012 •
Details
﻿
www.roxetteblog.com
Marie Fredriksson for Russian TV: Cancer is a new form of life inside of us

Marie Fredriksson gave a touching interview for programme about cancer done for a Russian NTV channel. Here are the quotes from Marie translated by Evgeny Perekopskiy and proofread by Celestte. This exclusive interview was shot during one-hour session at Marie’s house in Stockholm in December 2011. WATCH THE WHOLE PROGRAMME (Marie’s part starts at 39:48) […]
Mar 22, 2012 •
Details