﻿
There are now 24858 entries in ★ THE DAILY ROXETTE ARCHIVES! Check them out!
www.dailyroxette.com/archives
★ TDR Archive for September, 2009
﻿
www.roxetteblog.com
cdUniverse lists “Gessle over Europe”

American webshop cdUniverse.com lists “Gessle over Europe” as an import item with just one CD for $23.65 with the release day on November 3rd, but not on EMI but on Phantom label. Phantom is very probable just a distributor for American market.
Sep 30, 2009 •
Details
﻿
www.roxetteblog.com
Another comment from Per on Roxette remasters.

Of course we have been involved in the re-mastering of all the Roxette albums! Clarence spent a week on this! Where do all these strange ideas come from????? And same goes, of course, with the packaging and everything else. We’re still working as close as possible with the EMI Stockholm office since we’re still EMI […]
Sep 29, 2009 •
Details
﻿
www.roxetteblog.com
NOTP Antwerp brochures & trailer

Here are pictures of “Night of the Proms” brochures from Atwerp, Belgium – in the normal and VIP version. You can spot two different pictures of Roxette in this leaflet. You can also watch a trailer (Roxette’s “Joyride” video is there). Source: NOTP Antwerp, NOTP VIP, NOTP Twitter
Sep 28, 2009 •
Details
﻿
www.roxetteblog.com
“De’ ä kanon…” DVD

Robert Gustafsson became (in)famous among Per Gessle’s fans after he made few parodies of the Man on the very popular Sport- and UNICEF gala in Sweden this year. Now he has released a DVD called “De’ ä kanon…” (“It’s great…”) with clips from these scetches. You can watch a trailer. On the cover of this […]
Sep 28, 2009 •
Details
﻿
TDR Discography 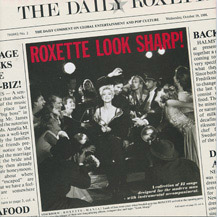 Both EMI Music Norway and EMI Music Denmark confirmed on theirs websites that the release date for “Gessle over Europe” in these countries will be the 26th of October, 2009.
Sep 27, 2009 •
Details
﻿
www.roxetteblog.com
Roxette remasters – the back.

The very first shop which dispatch products outside of Scandinavia added “Gessle over Europe” to its list. Megastore.se put strangely the import mark on the lastest release from Per Gessle. If you live in Australia, Canada, Hong Kong, Iceland, Mexico, New Zeland, Switzarland, USA or in few of selected UE countries, you can order this […]
Sep 27, 2009 •
Details
﻿
www.roxetteblog.com
Lars Demian’s covers available for listening

As you may remember Lars Demian has recorded a EP called “Att inte vara Pär Gezzle”. On this little album he covered two of the most popular songs written by Per Gessle. Both of them are available for listening in theirs entirety: Här kommer alla känslorna (På en och samma gång) – www.demian.se in ‘Media’ […]
Sep 27, 2009 •
Details
﻿
www.roxetteblog.com
P4 broadcasting time

LJUSDAL (Updated) - 090909 the Beatles remasters were released (by EMI), both in stereo and in mono, now EMI is releasing Roxette's entire (well…) album catalog remastered, albeit only in stereo… "The Rox Archives." Read the full story...
Sep 25, 2009 •
Details
﻿
www.roxetteblog.com
Bengans.se newsletter on Roxette remasters

Sep 23, 2009 •
Details
﻿
www.gessle.com
Head over to The Daily Roxette and read a brand spanking fresh interview with Per the Gessle!

Don’t miss this great interview! You’ll find it here.  Per talks about NOTP, Roxette’s future and dreams, and much more. You might even find answers to your questions.
Sep 23, 2009 •
Details
﻿
www.gessle.com
P4 tracklist, October 24. 1. Dressed For Success 2. The Party Pleaser 3.

Ginza.se lists “Gessle over Europe” and the forthcoming CD/DVD set costs just 159 SEK! It more or less 15 euros and the release dat is Monday, October 26. Unfortunately, this shop doesn’t deliver to any country outside Sweden. Thanks to mjzm @ RoxForum.
Sep 23, 2009 •
Details
﻿
www.roxetteblog.com
P4 broadcast tracklist

Per on Swedish radio

Per speaks out in The Daily Roxette fall interview

STOCKHOLM - Per has kindly delayed his trip to New York to meet with The Daily Roxette… Well, not really, it's actually his wife's stomach flu that keeps him from going, which is great (for us, not her!), Read the full story...
Sep 23, 2009 •
Details
﻿
www.gessle.com
Here's a very nice preview of the DVD, which - if you didn't know it - has been set for release October 28!

The Cutting Room, the leading Nordic sound production company with over more than 25 years in the industry, has just finished Per Gessle’s latest DVD “Gessle Over Europe – Party Crasher On Tour”. The show was taped by Arena Grande in Cirkus, Stockholm on May 9, 2009. On the same site you can watch 3:05 […]
Sep 22, 2009 •
Details